If you walk into a tattoo studio, you can easily see that there are virtually no limits to tattoo designs. Most studios have a plethora of books, posters, and stencil samples; and, as the work of a tattoo artist is much more than simply putting designs on a person’s skin, most are very skilled and very talented artists in general.

Nearly anything you can visualize, either by description or in a sketch, can be made into a unique creation by those who practice this form of art. While many customers prefer a tattoo which is either quite simple and basic, such as one’s name or initials, or a design which is totally unique and special to them, there are a number of styles which are widely popular.

Tattoos of Native American tattoo designs is one of the most popular. While most people who do not have direct information about tribal significance may simply select a design which looks good and appeals to them, traditional Native American artwork is by far the most often chosen in this category, as it symbolizes the Native American culture in general.

However, for those who are knowledgeable, designs can be produced which symbolize tribal affiliation. If this is what a person prefers, it is a good idea to first do a bit of research to learn the difference between the tribes and which ones use which symbols. For people who have Native American ancestry, this is an excellent way to both learn about and display pride in one’s heritage. One’s name can also be made into a tribal design if you or your artist has the knowledge to do so.

Oriental designs are also quite popular. Most tattoo studios have a large variety of these, ranging from intricate artwork to smaller symbols. Some of those which are chosen most frequently include the Chinese symbols for luck, prosperity, eternity, harmony, and love; the zodiac signs are also popular.
Although these designs may appear simple, and do have a rather unobtrusive effect, it takes a considerable amount of skill to draw them properly, as the thickness and thinness of the characters is very important. If you are looking for something which is stylish and tasteful, an Oriental design will have that effect.

For those whose religious beliefs are an important part of their lives, a tattoo of a religious symbol can be a permanently-displayed expression of this. Religious tattoos range from the most basic small crosses to large artwork depicting Saints and Jesus to nearly everything in-between. While most religions tend to frown on the subject of tattoos, they are represented in large varieties nonetheless.
You will probably see crucifix tattoos and Star-of-David tattoos, despite the fact that the traditional religious belief is that one should not get tattoos. For most modern people, even those who take their religious beliefs very seriously, getting such a tattoo is not seen as violating religious standards, but a matter of pride in what they believe.

Celtic designs often appear in tattoos, also. From the most basic designs which everyone understands, such as shamrocks, to the intricate Celtic cross which fewer recognize the original meaning of, this culture has produced a wide array of beautiful artwork that can be used in tattoos.

Most people have some idea what they like, and each person’s individual preference is no more difficult than finding it or having your artist create it. Whatever your background, interests, lifestyle, you are sure to find a tattoo design that appeals to you and is special to you. 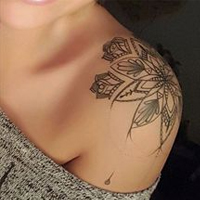