Why Get a Tattoo?

We’ve all seen tattoos of various designs, styles, sizes, shapes and colors. Aside from the fact that tattoos can be removed by lasers, surgery and other methods, they are quite permanent. Most people have very specific reasons for these lifelong marks and some even have stories behind each one.

One simple reason for a typical tattoo is just for looks. The tattoo may be one that resembles one seen on a celebrity. It may also be a design that is simply pleasing to the eye. Perhaps the tattoo has bright colors or neat shapes that attract the eye. Aesthetics are one common reason for many tattoos.

Another reason why one might get a tattoo is as a memorial. Friends and family who have passed away are often memorialized through tattoos. These memorials are also often created in the memory of a particular celebrity. These might be designed with flowers, crosses or other shapes and dates of birth and death. They might include special sayings that were important to the deceased. They may also involve complicated tattoos that are copied off an actual photograph.

Children and relationships are a popular reason for getting a tattoo. Millions will have tattoos designed incorporating a child’s, spouse’s or partner’s name. Typically these will be accompanied by other designs such as flowers, butterflies, shapes and even likenesses. Hearts, stars and script letters are often found on spouse or partner name tattoos.

Many people will have tattoos designed to commemorate special events experienced during their lifetimes. Achievements, difficult times and other special events are often displayed as a lifetime reminder of an important time in one’s life.

Tattoos also represent spiritual status for many cultures. They can also be a symbol for social ranking. Some social groups are known for specific tattoos which would require a member to receive the same. Others are known for having tattoos in general, regardless of their designs.

Expressing individuality and personality are often the most common reasons for getting a tattoo. If a person likes butterflies, they might get a single tattoo or multiple tattoos flaunting butterflies. If another enjoys a particular field in which they are employed, they might have tattoos representing what they do for a living.

There are other ways to look at expressing individuality through tattoos, however. Many tattoos are designed to reflect heritage. Ancient symbols that are associated with the history of many cultures are often displayed on those who are of a particular culture’s decent. For example, someone of Irish decent may choose a tattoo design depicting the Claddaugh design while another of Egyptian decent might prefer one similar to ancient ancestors. On the other hand, many choose designs resembling certain cultures simply for aesthetics.

Regardless of where you want to have your tattoo applied on the body or where you have the procedure done, it’s important to comprehend why you really want the tattoo. Tattoos are permanent. Having a tattoo created for the right reasons, and reasons that are truly important to you will help increase the enjoyment of the design for years to come. 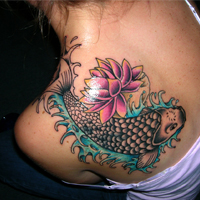